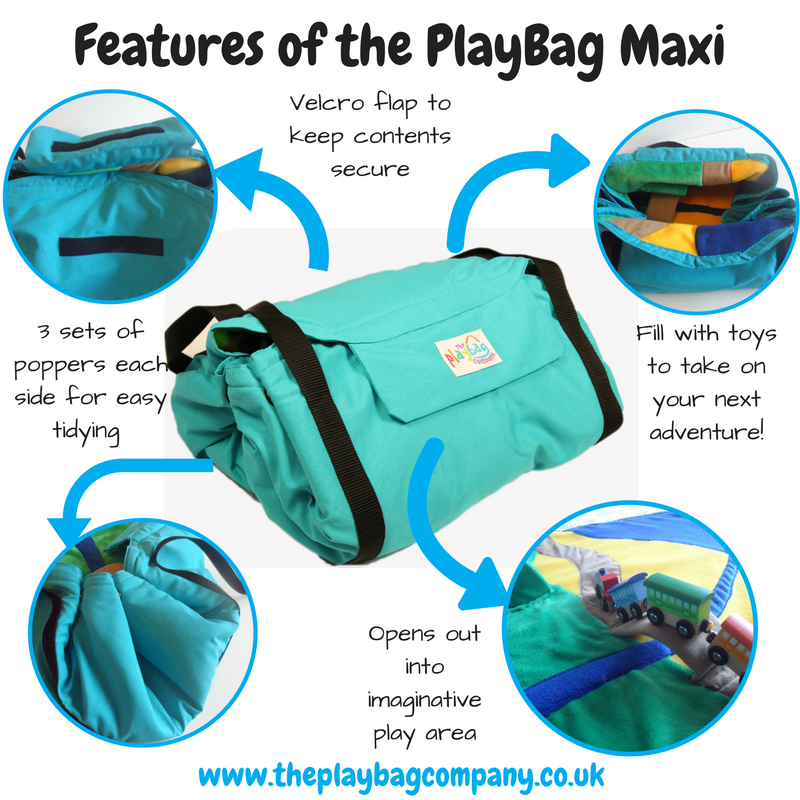 What makes the design of the PlayBag unique?

When I first deigned the PlayBag for my son, there were two main things that it needed to be… it had to be functional and it had to be stylish.  I wanted it to be engaging as a play area as well as practical for me. There seemed to be plenty toy bags on the market, but they all tended to have drawstrings, which I was not keen on, and were often plain and one-dimensional and not quite what I wanted.

After a few design revisions and modifications, I arrived at the current model which has changed very little since, although there have been new designs for the interior play areas.

The most important part to me was that it was engaging enough that it would hold my toddlers’ attention for long enough that I could get stuff done, whether it was the ironing, getting my hair cut, or waiting for my daughter to finish training.

I wanted the PlayBag to be gender neutral and to have some 3D elements such as bridges and caves to stimulate the imagination. I also wanted them to be useable with a wide variety of toys to suit whatever the child’s interests at the time.  Personally, I find they work well with action figures, Lego, Playmobil and Brio/Viga toys well, however, I have been slightly conditioned by reality! It is not unusual for me to see Little Fella playing with it with an oversized tractor and a tiny dinosaur! But hey! Who am I to get in the way of a child’s limitless imagination! 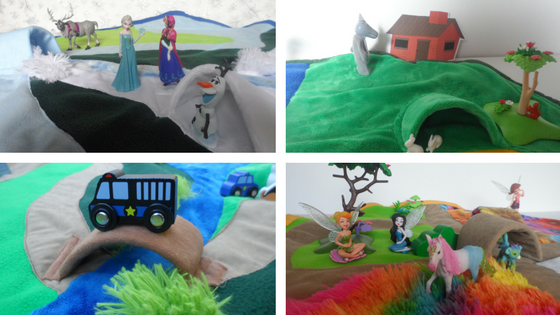 As mentioned before, as I did not want to use draw strings, I had to think of a different method that made the side of the bag secure, but was still quick and easy for little hands to manage. After looking through my abundant craft stash, I found a set of Prym poppers, and quickly decided that they would be perfect for fastening the sides of the bag. The Velcro flap, was a later addition as I realised that the design left the top of the bag wide open. The current maxi design has three sets of sturdy poppers each side as well as the Velcro flap.

Quick and easy to use

The main idea behind the PlayBag was that it gives children a safe and engaging place to play wherever you are, so it was also important that it could be packed away quickly and was easy enough for anyone to use. Once you get the hang of the poppers, they can be done up in seconds! The trick is to start at one handle and attach the poppers in order – simple! 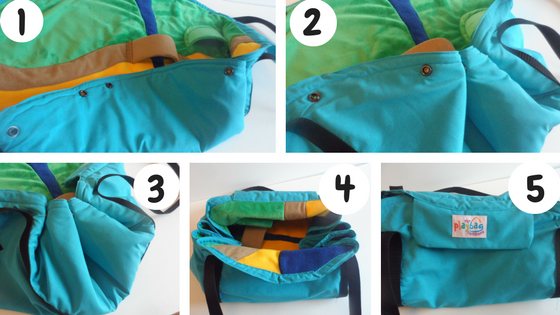 Each and every PlayBag is unique in its own right

As the PlayBags are all handmade they all have their individual quirks, so although based on the same design, they are all unique. Also, I only ever make them in small quantities, and then tend to team them with different exterior fabrics, so I can happily say that no two PlayBags are exactly the same - you will be getting something that is unique to you even if you do not go down the customised route.

Please do let me know if there is anything other features that you would like to see in the PlayBag.