It has been just over a month since the launch of the PlayBag Mini and the feedback has been very positive! Today, I thought it would be a good idea to have a look at the differences between the standard PlayBag and the PlayBag mini to help you decide which one is for you.

The Standard PlayBags are ideal if you are going to be somewhere for a little while and have plenty of space, for instance, we used ours extensively over the summer holidays, especially when we were on the canal boat! It got played with on the bed and even on the front of the boat, then it all got packed away neatly and hung by the door. No stepping on those loose bits of lego for us! Ouch!! And as far as I know, no little toys went overboard!

It is also ideal for visiting family or friends, where space is not such an issue, but you still want to keep your toys contained. Peter often also uses his for a quick play before bedtime.

The PlayBag mini came into its own when we were on our day trips out, or out in bars or restaurants where space was a bit more limited. It could be used on small tables or on the sofa next to him. He also used it in the car on his lap, but it would work equally as well, if not better, on a train.

It also has the added benefit, being of smaller size that it is much easier even for small children to carry by themselves. Bonus!!

To give you an idea of the difference in size, here is Peter carrying the PlayBag mini and the Standard PlayBag. 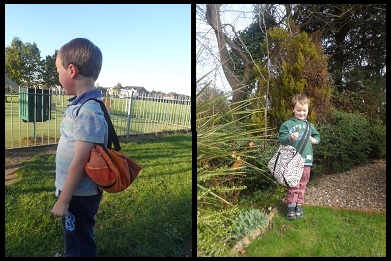 And the two PlayBags side by side.

If you are looking to choose your first PlayBag, it is probably best to consider where you would use it the most. If you need to be compact and contained within a smaller space, or travel by car or train frequently, then the mini is possibly the better option, whereas if you are not to confined by space, then go for the larger version. We are very spoiled in that Peter can have his pick as he has all the original prototypes to play with, but as we are often in gyms, we are not short of space, so probably use our larger PlayBag more. Mind you, nowadays, he usually sneaks a couple of minis in there too!!

Please get in touch if you want to discuss options further or fancy something a bit different.